The situation in Sudan remains volatile 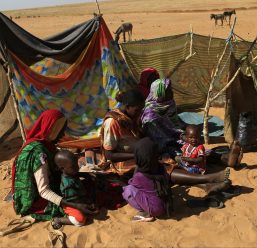 These appeals concerned the question whether the guidance given in AA (non-Arab Darfuris – relocation) Sudan CG [2009] UKAIT 00056 and MM (Darfuris) Sudan CG [2015] UKUT 10 (IAC) needed to be revised in light of the current country evidence including the consideration of internal relocation of non-Arab Darfuris to Khartoum. Upper Tribunal Judges Pitt and Blum found that the situation in Sudan remains volatile after civil protests started in late 2018 and the future is unpredictable. The Upper Tribunal judged there is insufficient evidence currently available to demonstrate that the guidance given in AA (non-Arab Darfuris) and MM (Darfuris) Sudan requires revision and thus those cases should still be followed. In the present appeals, the first appellant AAR belonged to the Berti tribe and is a Darfuri and a citizen of Sudan. In August 2017 his asylum claim was refused. The decision-maker accepted his claim to be a member of the Berti tribe and a Darfuri but rejected that he was ever arrested and detained or that he was a fugitive from prosecution in Sudan. It was not accepted that he would be at risk on return. His appeal was dismissed and his account was not found to be credible. The FTT found that other than his Darfuri ethnicity AAR had not been involved in politics and did not have any particular profile of any kind. Also a citizen of Sudan and a Darfuri, the second appellant AA belonged to the Zaghawa tribe.

He arrived illegally in the UK and immediately claimed asylum, claiming that he was detained for being a Darfuri and thereafter held for five months at an army camp near where he claims he was forced to clean and cook for soldiers. He was refused asylum in 2017 as the decision-maker rejected his claim that he had encountered problems with the Sudanese authorities. His appeal was dismissed and the FTT found that he would not be persecuted on return and the Upper Tribunal upheld the finding that there had been no past persecution but found that the FFT had taken the wrong approach to the country guidance cases and whether it would be unduly harsh for AA to relocate internally within Sudan. His case was subsequently linked to AAR’s in order to consider whether the existing guidance required revision in light of the current country evidence. The Home Office had conducted a fact-finding mission to Sudan in August 2018 in order to obtain information about the conditions of Darfuris in Sudan, a focussing on Khartoum, and the overall treatment of returnees.

Thereafter, the Report of a fact-finding mission to Khartoum, Sudan was published in November 2018 (FFR) and after its service the appellants jointly instructed three experts to analyse and opine on the issue raised in these appeals. The three experts who gave evidence to the Upper Tribunal were Dame Rosalind Marsden (former UK Ambassador to Sudan), Madeleine Crowther (Co-Executive Director of Waging Peace) and Peter Verney. The Upper Tribunal also heard oral evidence via video link from Khartoum from a civil society activist in Sudan. The witnesses provided evidence on the civil unrest in Sudan that began in November 2018 and subsequently intensified.

The regime’s use of violent methods to stop the protests was not disputed and its use of mass arrests, with widespread reports of mistreatment of detainees, was not in question. The Home Office argued that the evidence on the protests and the regime’s response did not entail a sufficient specific interest in Darfuris to have an impact on the question of a general risk on return for Darfuris who had no profile other than their ethnicity and asylum claim in the UK.

Things worsened with time and the military decided to oust President Bashir in April 2019 and Salah Gosh head of the notoriously abusive National Intelligence Service (NISS) also resigned. The Transitional Military Council (TMC) also declared a state of emergency for 3 months, stating that wanted to enter into a dialogue with civil society but the protests continued whilst discussions took place. During May 2019 and in June 2019 a number of attacks on protestors occurred across the country.

The Janjaweed, or the Rapid Support Forces (RSF), were deployed in Khartoum and the worst incident appears to have occurred on 3 June 2019 when the main protest site in Khartoum was attacked and at least 40 bodies were recovered from the Nile, having been thrown there by the RSF. The protests intensified and reprisals continued and the internet was shut down. The Home Office wished to things to drag on further but the appellants argued that the situation in Sudan remained unpredictable and that adjourning for a further 3 months was inappropriate and submitted that the Tribunal should proceed to determine the appeals which had to be allowed where the situation in Sudan could not be said to amount to the “very strong grounds supported by cogent evidence” required for a Country Guidance case to be considered no longer authoritative and set aside or replaced: SG (Iraq)[2012] EWCA Civ 940.

Then, given the tense and volatile situation in Sudan, the Home Office conceded that a further delay was inappropriate and that AA and AAR’s appeals should be determined on the basis of the existing Country Guidance cases. It accepted that this meant that the appeals had to be allowed where the appellants’ profiles as Darfuris brought them within the ratio of AA (Sudan) and MM (Sudan) and the Upper Tribunal allowed both asylum appeals on that basis.

It held that the answer to the Country Guidance question that was originally asked in these appeals is:

The situation in Sudan remains volatile after civil protests started in late 2018 and the future is unpredictable. There is insufficient evidence currently available to show that the guidance given in AA (non-Arab Darfuris – relocation) Sudan CG [2009] UKAIT 00056 and MM (Darfuris) Sudan CG [2015] UKUT 10 (IAC) requires revision. Those cases should still be followed.